Boston Scientific will get out of the pandemic with dignity

Brief description of the issuer

We maintain a Buy recommendation for Boston Scientific.

Boston Scientific was founded in 1979 and its first product was catheters for gallbladder surgery. In subsequent years, the company expanded the range of produced catheters and devices based on them in other areas, including cardiovascular. In 1994, Boston Scientific acquired 9 companies in a year and a half, increasing its market capitalization more than 5 times during this period, and the number of employees - 4 times.

Thanks to an aggressive acquisition policy, the company has significantly expanded its product line, which has become highly diversified. Boston Scientific's revenue is distributed almost equally in 3 main areas: about 30% - surgical direction, about 30% - segment of heart rate management and neuromodulation, about 40% - cardiovascular direction.

We are impressed by the fact that Boston Scientific is currently one of the key players in the important segment of medical high-tech - transluminal balloon angioplasty.

Last year, there were favorable results from a trial of the LUMINIZE RF balloon catheter in 100 patients with atrial fibrillation, and this is very encouraging news for Boston Scientific - atrial fibrillation has traditionally been treated with medication and ablation, and catheter technologies can improve treatment outcomes.

It is worth noting that in the second quarter of 2019, the company carried out a controlled launch in Europe and the United States of its LOTUS Edge Aortic Valve system, the only approved aortic valve that gives doctors the ability to adjust the position of the valve after insertion.

In the third quarter, the company launched the WATCHMAN ™ left atrial appendage occlusion device in Japan, and the number of patients with this device globally exceeded 100,000.

In addition, there was good news from Boston Scientific research on the Vercise ™ Deep Brain Stimulation System for Parkinson's and Spectra WaveWriter ™ for Chronic Pain, and the 3-year study showing better benefits from implantation of the LOTUS ™ TAVR system versus CoreValve® from competitor Medtronic.

Boston Scientific's developments in the field of heart rate and other important areas of medicine, in our opinion, will become more and more in demand in the long term, as the unhealthy lifestyle of the population in many developed countries and the aging of the population lead to an increase in cardiovascular pathologies.

In the first quarter, Boston Scientific's revenues increased 2.0% YoY to $ 2.54bn, in line with the average forecast, and adjusted earnings per share were 28 cents, 3 cents below Wall Street's expectations.

Boston Scientific maintained positive revenue growth in two of its three main segments - + 1.1% in surgical and + 5.5% in cardiovascular, while the smallest segment of heart rate and neuromodulation recorded a decrease in revenue by 7.2%.

It is worth noting that on March 30, the company revoked its forecasts for the current year due to the uncertainty surrounding the coronavirus pandemic.

The coronavirus pandemic negatively affected the financial results of Boston Scientific in terms of reducing the demand for devices and consumables needed for routine medical procedures and surgical interventions - due to the viral threat, patients and doctors chose to postpone non-emergency procedures to a later date. One way or another, the necessary procedures will resume after the quarantine measures are lifted, and the lost revenue streams will still reach the company on a delayed basis - the pandemic does not cancel the need for scheduled operations, it only delays them for a number of months.

Boston Scientific also has advantages in the current environment - the FDA has urgently approved the Coventor alternative ventilator, developed by the company, at a cost of only $ 1,000, and this device will contribute to the company's revenue this year.

Evaluation of the company by metrics and comparison with competitors 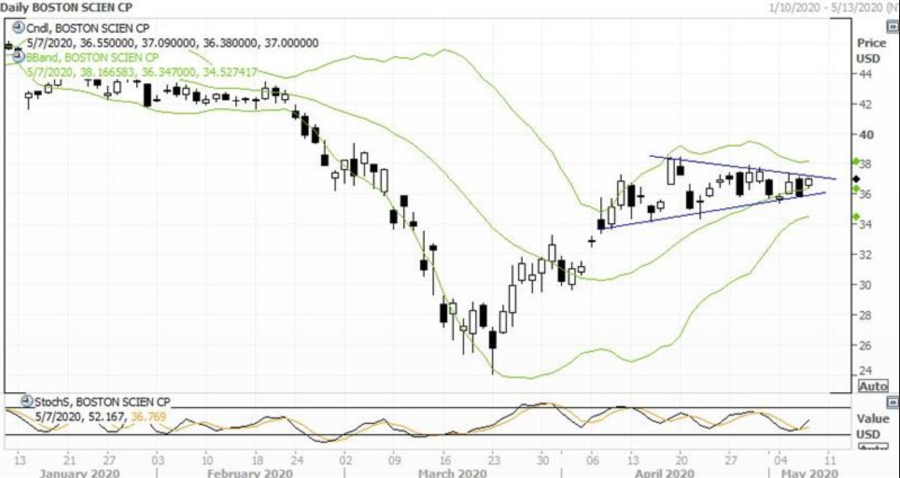 In terms of the current picture of major multiples, Boston Scientific is undervalued against major competitors and the medical device and consumables sector.

Considering the above, we continue to view Boston Scientific shares as a promising investment for the coming year and recommend buying them with a target level of $42.