Sell Tesla stock, if you own it

I am convinced that the Tesla, Inc. (TSLA) meteoric stock rise over the past year will enter textbooks as a prime example of a bubble. There is no fundamental reason that for it to be at the level it is currently traded. 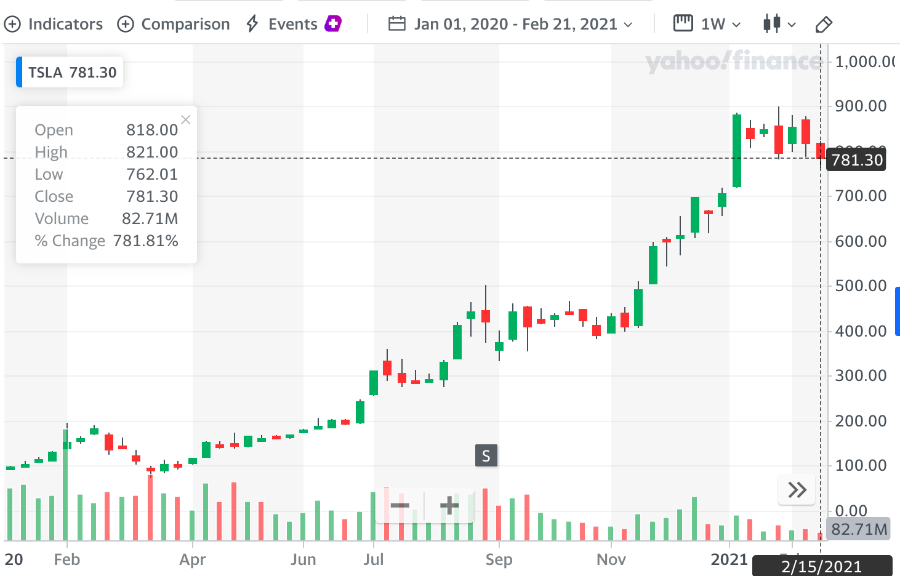 Yes, Tesla, definitely, pioneered the all-electric mass-produced car and it still the largest and most prominent company in this newly-created sector, but is not the only one. Tesla’s share of electric cars sold globally is 18% - it can only be considered dominant in relation to other manufacturers. Tesla still could be considered a trend-setter, but the competition is catching up. Every major world car manufacturer out there has its own lineup of electric cars either in production or testing.

Tesla’s first-mover advantage is disappearing very fast. One other advantage, though, just got much more pronounced in the past year: its market capitalization. The soaring stock price gives the company accesses to an enormous amount of actually free capital. By issuing and selling new stock Tesla could get “free” money with which it can fund its ambitious investment projects. It is a huge advantage but a transitory one: once the share price will begin to decline, (as inevitably it will) this source of funding will close very fast, as any new share issuance will only accelerate the slide.

The Tesla stock bubble is not a secret to any stock analyst. In fact, paradoxically, this is the main reason of stock price meteoric rise: there was so much short interest (or short positions) on the stock, that any meaningful push upward became a self-perpetuating phenomenon. Short positions that were deep in the red had to be liquidated (i.e. the stock had to be bought to offset the short position) pushing the stock even higher. As the company valuation got even more out of line with reality, other short sellers established new short positions, which in time (as the stock continued to rise) had to be liquidated, too, extending the stock’s price rally. And so on… Until now, when, apparently, there are no people left willing to bet on the stock price to decline. From now on, the stock should just move down, unless, of course, someone will try to establish a sizable short position on the stock again.

The story of the Tesla stock to me seems to be very similar to that of Nortel Networks Corporation (NT). At one point it accounted for more than a third of the total valuation of all companies listed on the Toronto Stock Exchange, and it was a “must have” stock in everybody’s portfolio. What happened to it since then? Well, the company is no longer around - it went bankrupt. It’s a valuable lesson for investors in over-hyped stocks. Check this story out. I am sure you will find many eerie similarities with what is now happening to the Tesla stock.