Since our recommendation of February 25, 2021, Alibaba shares are down 10.3%. The main reason for the decline was the main risk identified in our figure - regulatory pressure. In early April, the company was fined 18.2 billion yuan for antitrust violations, the largest such fine in the country's history.

At the moment, the story with the fine even provoked a positive reaction, tk. this could signal the end of disagreements with the government. However, the situation with the fintech subsidiary of Alibaba Ant Group, whose IPO was abruptly disrupted, has not come to any decision, and the leaders of Chinese technology companies have been periodically summoned to meetings with the regulator in the last month to discuss the implementation of antitrust regulations. This naturally puts pressure on the entire Chinese tech sector.

In addition, over the past two months, the Chinese market as a whole looked significantly worse than its global counterparts. The CSI 300 is down 6.5% since the beginning of March, although the world's major indices regularly update all-time highs. In addition to regulatory pressure on the technology sector, the reasons for the decline in the index include the margin call of Archegos Capital and the slightly tightened monetary policy of the People's Bank of China. The decline in the index inevitably negatively impacted Alibaba shares as well.

At the same time, Alibaba does not have any problems with operating activities that could alert investors. On May 13, the company plans to present its financial results for the first quarter of 2021. Revenue is expected to rise 57.5% YoY to 180.1 billion yuan, while net income per share is expected to rise 28.4% to 11.8 yuan. In other words, the pace of business growth remains extremely strong, and the prospects for e-commerce business in China, where Alibaba occupies a leading position, still look attractive.

Against the background of the above, we believe that Alibaba shares remain interesting to buy. We reiterate our target price of $ 312.1 to be relevant, which is in line with a Buy recommendation and an upside of 37.6%.

Technically, Alibaba shares are traded in a converging triangle. Probably, the direction of the exit from this triangle can determine the vector of the medium-term movement. At the same time, slow stochastic lines indicate local oversold stocks, which increases the likelihood of a rebound. 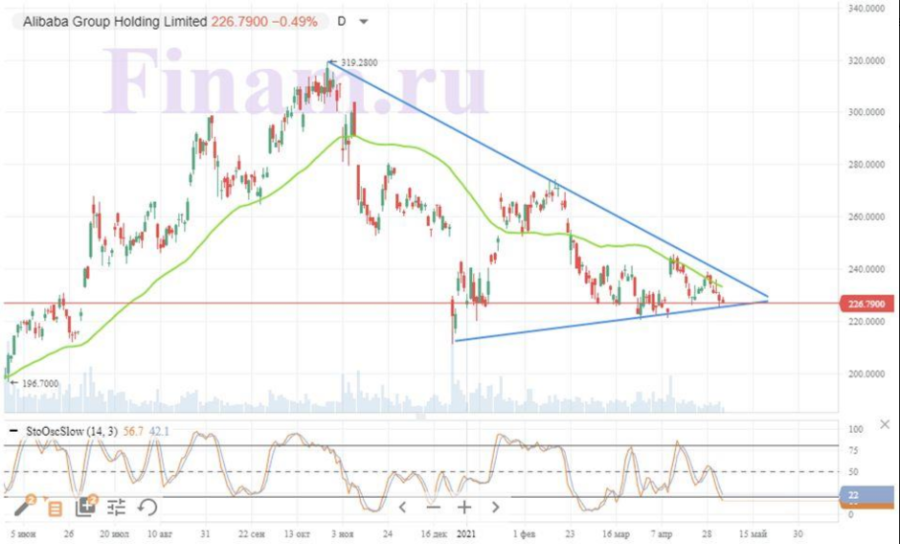